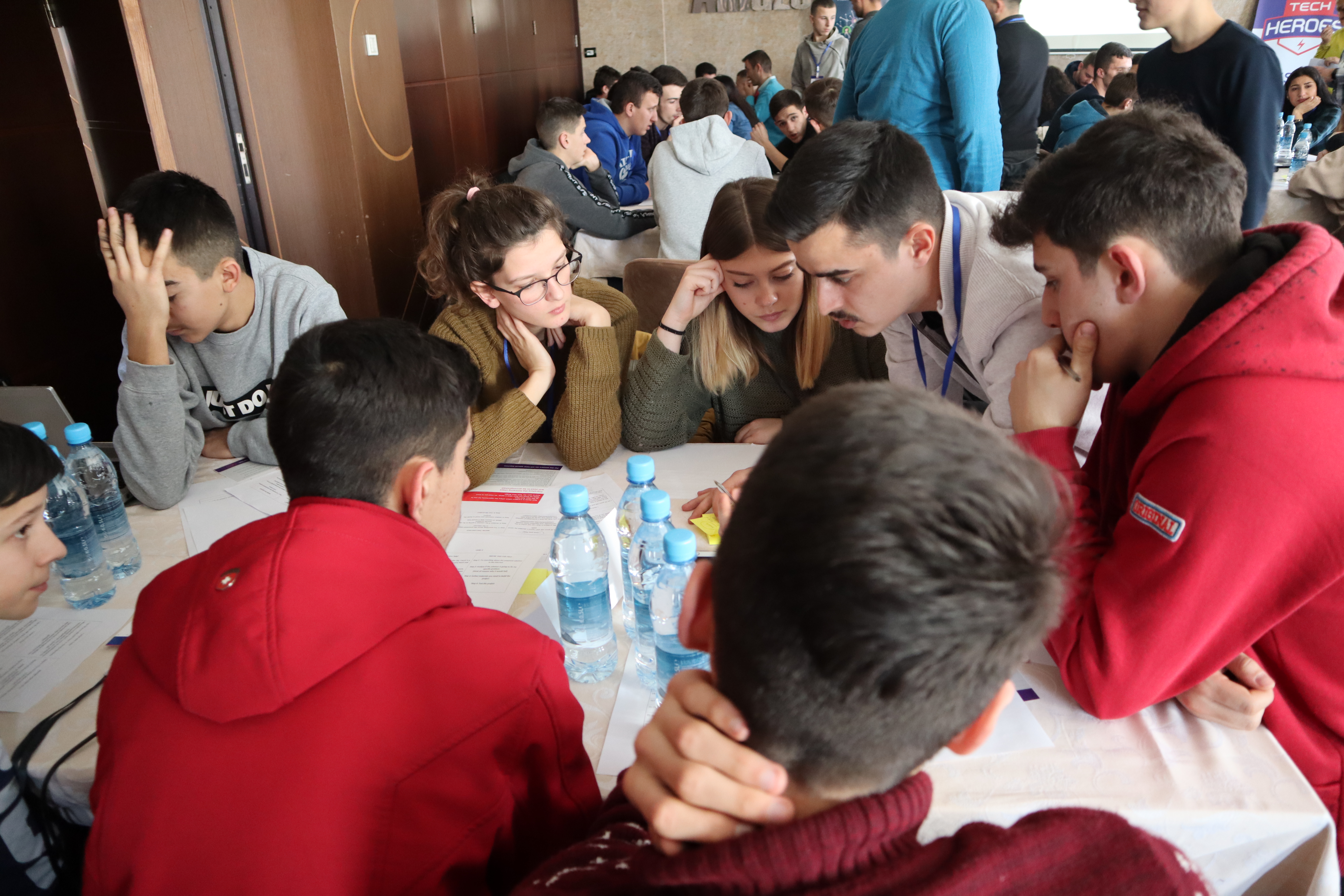 With the approval of Tech Heroes 3rd edition, and the experience from previous 2 editions, our team is highly motivated to further improve the project so we increase the value generated for our beneficiaries both in social interaction and technical skills.
This edition of Tech Heroes will target the engagement of around 110 young individuals, with participants being of about 50% of Albanian and 50% Minority groups. In this edition as well, we will engage Serbian Teachers and other minority teachers where possible to act as trust buddies for their respective communities as this has shown to be successful in a higher involvement of minority engagement. The participants in Tech Heroes 3, will go through Tech Heroes program which consists of 5 main stages:

Additionally to this, within the project we will provide continuous support for the winning teams of Tech Heroes 2 and 1 edition, as well as any beneficiary that has shown potential.
This edition of Tech heroes due to COVD19 situation will be planned to be executed in two routes: Online and Physical, with both operational plans in place, and execute them depending on the governments decisions for restrictions and by taking care of each participants safety and protection. Of course for all physical interaction, special care will be put in social distancing, and proper hygienic requirements for a safe interaction.
As a project aiming to increase the social interaction between different ethinic groups, in this edition we will put special attention to the social interactions and for each phase of the project we will create more opportunities for meaningful interaction, by introducing mechanics that will require participants within their groups to be more active.
What we also know is that we will need to work with all the beneficiaries, especially with the minority beneficiaries to generate more word of mouth in their communities. The community trust will also be part of the responsibility of the minority teachers. This will be done by providing in the beginning of Tech Heroes - hash tags, ask them to post as much as possible in their social media networks, and even incentivise this behaviour by providing surprise awards for the most active ones.
For each phase we propose the following changes. The changes have been introduced as improvements for a higher involvement of minorities, improved interaction and overall participants quality With the ever growing impact of technology in our lives, our role in society is shifting. There is a confirmed need for individuals equipped with the 21st century skills (also known as digital skills) to handle this new era. The 21st century is redefining the job market, new professions are being created, while some professions are going to be obsolete due to technology very soon. Jobs that require repetitive and routine tasks are highly at risk of being replaced by technology, and jobs that require critical thinking, problem solving, creativity and communication are on the rise. This shift also means that our educational system should be reformed to meet these future market needs. It is shown historically that education systems are slow in change, and therefore activities that expose youngsters to creative experiences should be strongly supported as an alternative educational channel and as a force to positively push schools towards new methods. The bridge that the current education systems create to the labour market continue to be limited. In Kosovo, the current gap between education and industry is that only 12% of young people think that university experience helps in finding a job [1] and according to the GAP institute, 92.6% of businesses that have been recruiting in the last three years, 82.1% of them have had difficulty finding qualified Employees[2].
Given that the youth makes most of Kosovo’s population (Kosovo Agency of Statistics, 2013), providing quality education is an unequivocal investment for the population’s and country’s future. Education can be used to improve the skills and the mindset of a future labor cohort and as such contribute to society’s development. Moreover, in Kosovo’s particular societal development, education can also be used to tackle another equally important segment - interethnic reconciliation. Despite Kosovo being built upon a multiethnic premise , the multiethnic component in the new Kosovo identity continues to be immensely limited (Maloku et al., 2016). Ethnic groups, especially Albanian ethnic majority and Serb ethnic minority, continue to feel their ethnic identities are being threatened by the new overarching Kosovar identity and this threat takes a toll on the already disturbed interethnic relations in the country